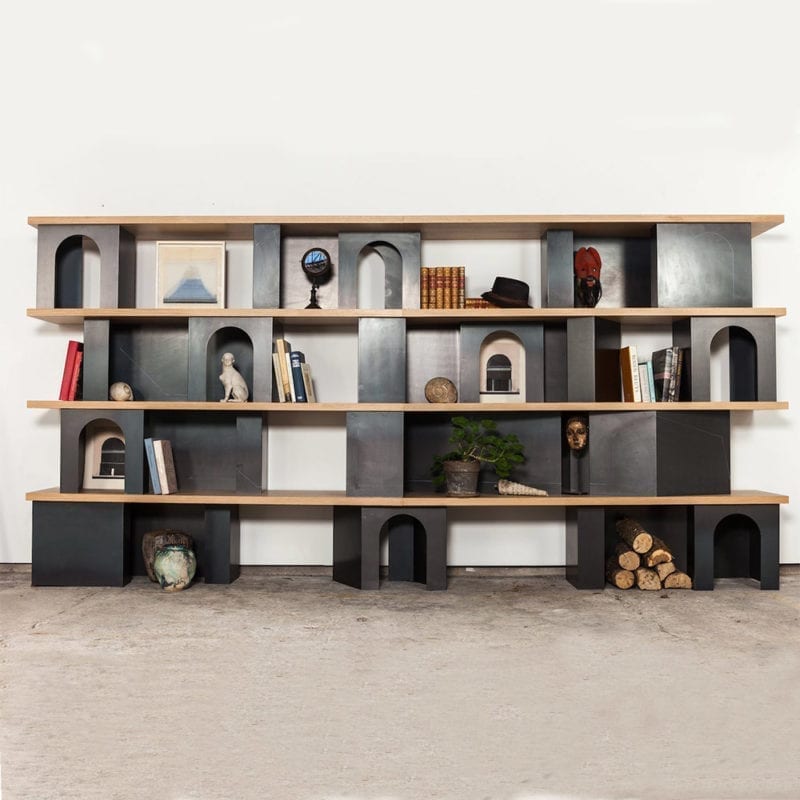 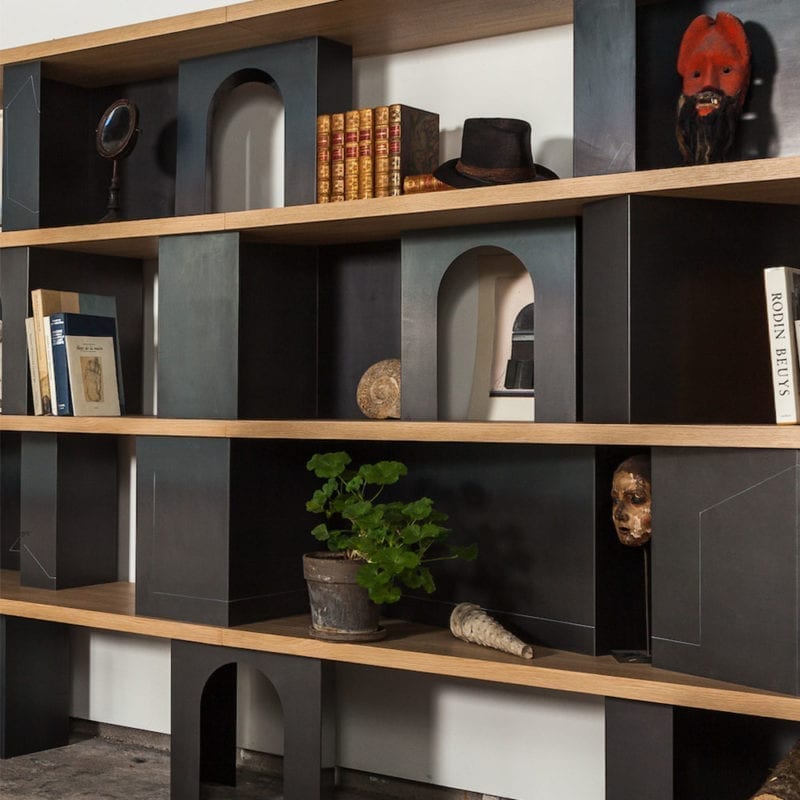 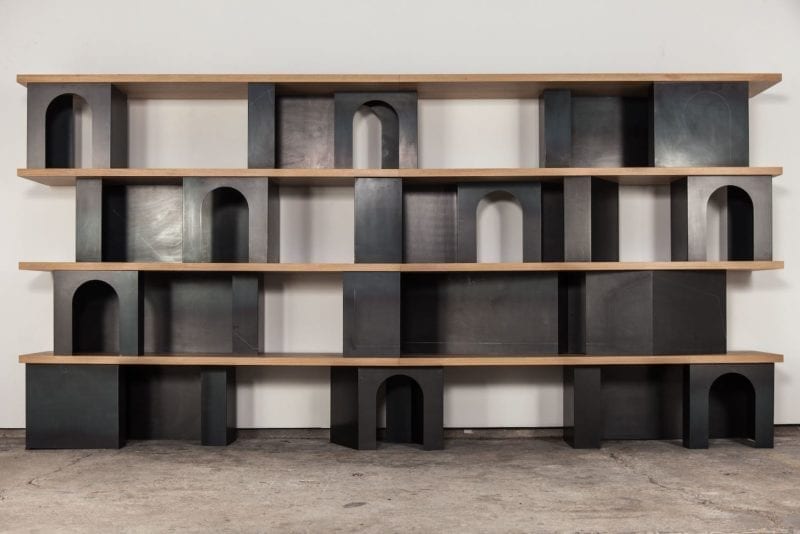 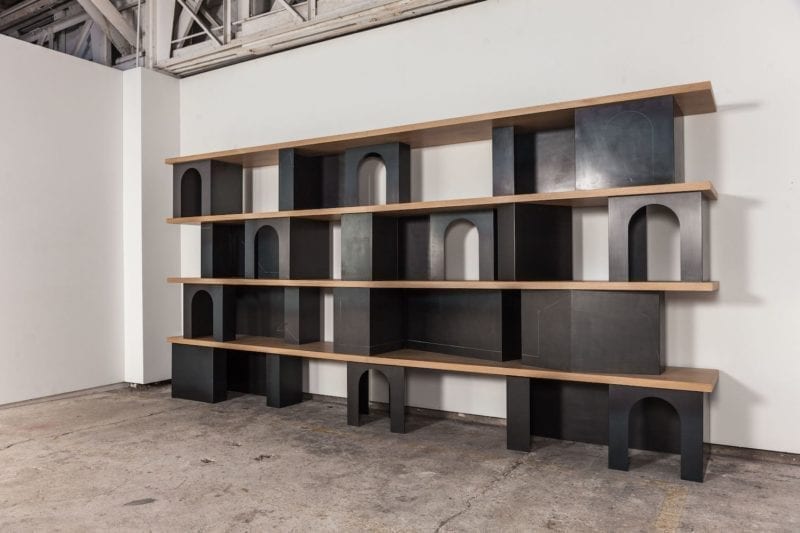 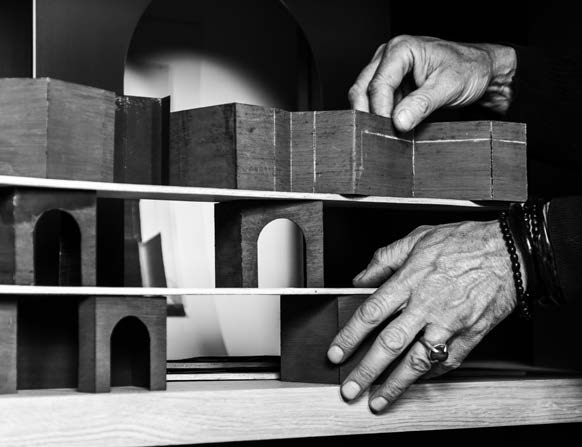 From 25 140€
incl. VAT*
The VAT is an estimate. The amount will be confirmed at checkout depending on your billing/delivery address. 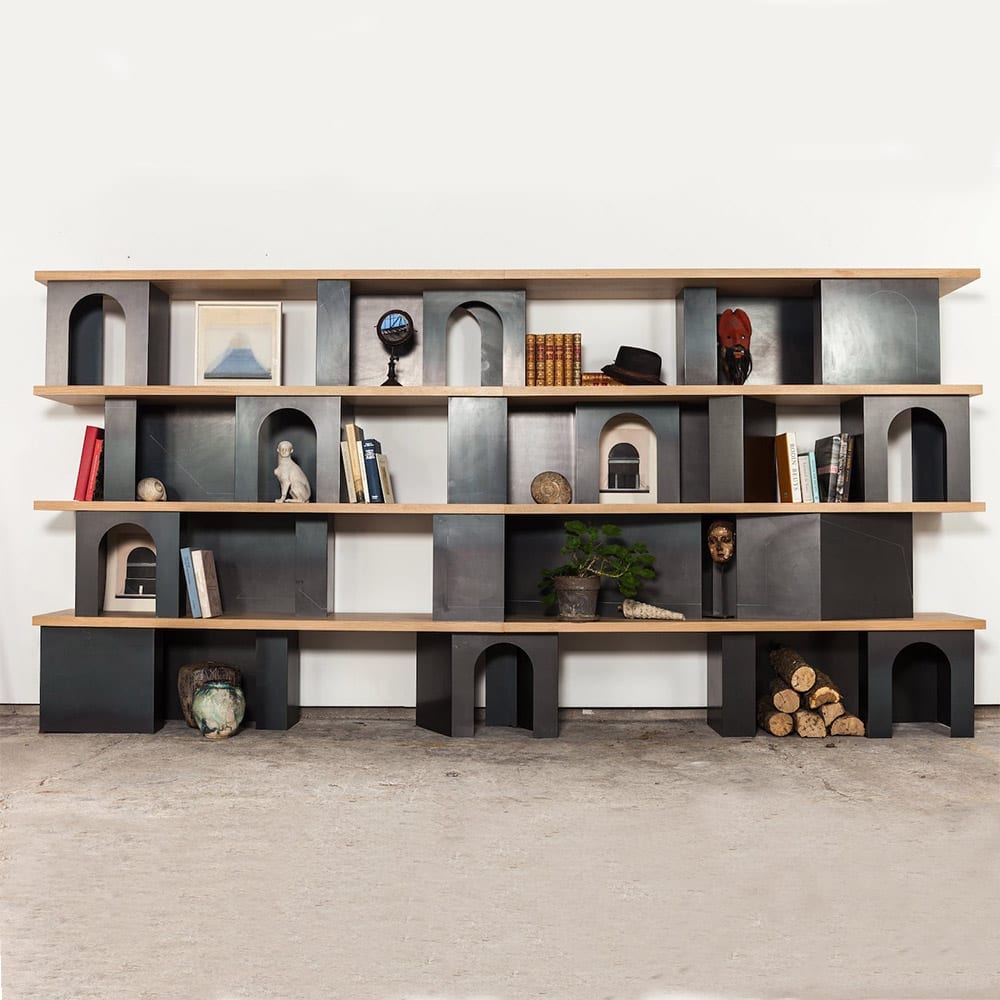 Laurent Jaffrennou is a man of many wonders: besides designing exceptional pieces of furniture, he is also a known presence at the famed Puces, the Parisian flea market, where for years, he ran a sought-after antique store. In this treasure trove he showcases the most wonderful eighteenth century’s popular textiles alongside furniture, curiosities and other fragments of vanished worlds. Sometimes, for his artist friends he creates small frames that are like box sets for an imaginary theater. For MAYARO, he created Obazine, a set of modular bookcases designed to stage and relish one’s own favourite artworks and cultural mementoes. Obazine is a modular construction made of folded metal and wood, punctuated by arches to display curiosities and artworks alongside books. It is inspired by the “conditoria”, the most ancient armoire in France, found in medieval churches to safeguard precious liturgical objects. Hand-made in France, the modular units can be assembled into one single bookcase (4 m long) or as two separate parts (2 m long each).

For their first series of pieces in the Craft Editions Collection, Mayaro partnered with designers Godefroy de Virieu and Stefania di Petrillo inspired by their sensibility to gestures and the emotion which lies within hand-crafted objects. At present, de Virieu is the AD of “Petit H” collection, by Hermès. Each piece is made-to-measure, and inspired by imaginary travels: a balloon in the sky, a trip to Saturn, a walk in a chestnut forest, a visit to a jeweller’s atelier… The signature style of this first edition is the mix of natural, almost raw materials such as wicker or chestnut wood, with leather and rusted metal: all elements that become even more beautiful with the patina of time.  Other statement pieces embody the know-how of cabinet maker IOTA Element, such as the Suspended bookcase which can hide or reveal a secret window, the delicate weavings of Frédérique Lamagnère, or the ethereal yet luxurious feather fans by Duvelleroy.

This item has been added to your cart

NEW IN: Available in a limited edition of 30, sign

ALWAYS WINE AND ROSES: The Apolline table by Humbe

DRESS UP THE FLOOR: In an interview with the Frenc

NEW IN: The Melted Candle Holders by Osanna Viscon

NOT JUST FOR THE DINING ROOM: The complex and deli

LIGHT IT UP: The Autumn Light Chandelier by JMW St